In our firm we currently have an official warning letter from the Berlin-based lawyer Philipp Bickel. In his letter Bickel alleges copyright infringement on behalf of his client, a Dutch photographer, in relation to a picture he took in Dubai. Dros became aware of the infringement after utilising the services of PhotoClaim. Bickel is currently pursuing the matter in the US, arguing for the application of German copyright law.

Our client, an American business, is accused of displaying the Dubai picture on their website over a ten-month period without permission. Consequently, Bickel demands the payment of compensation totalling €3041.50, which he justifies with reference to the so-called MFM-list (explained below).

Supposedly then, the Dubai photo is worth over €3000, based on our client’s usage over a 10-month period.

NB: we were able to buy the picture through official channels for €29, more on that later…..

In summary, this matter is about a photo from Dubai, owned by a Dutch photographer, who hired a German law firm in order to seek compensation from a US business. According to Bickel, the Berlin courts have jurisdiction over this case.

The first legal issues already arise at this point. The law is well-settled on the issue of when foreign courts have jurisdiction. The law does not allow plaintiffs to simply choose any jurisdiction world-wide that is favourable to them. As always, the individual circumstances specific to each case hold greater importance.

In the course of researching about the Dutch photographer we stumbled across his personal website. There the photographer clearly explains that the applicable terms and conditions that govern his photos and their usage are those found on DuPho (a Dutch association of professional photographers) and Dutch copyright law. No references whatsoever to Germany or German courts can be found.

The mere fact that photographer applies Dutch law in his work as a photograher, gives rise to grave concerns about the jurisdiction of a German court.

The Dubai photo can also be found on 500px, a website where anyone can upload a photo and make it available for purchase. The website does not check whether or not the person uploading the picture holds the copyright over the picture or is otherwise permitted to sell it. This is why we were not able to conclusively verify that the dutch photographer was in fact the photographer of the photo.

The reason why Phillip Bickel wants to bring the case before a German court is because of the so-called MFM-list. This is issued and maintained by the MFM and lists the commercially available prices for photographic works. Previously, the MFM-list was frequently consulted by German courts.

The list, however, cannot be applied in all cases, rather only in those where the photographer licences his photos on the basis of the MFM-list. As described earlier, this could not be said of the Dutch complaintant, who sold his works according to Dutch rules and regulations.

Where there is an actual breach of copyright, it generally follows that compensation must be paid.  This is calculated according to an analogous licence, which the court determines the parties would have entered into had the picture been sold in the usual manner. Additional penalties are highly uncommon under German copyright law.

Philip Bickel’s calculations for compensation can therefore only be described as adventurous. According to his calculations the picture is worth €3041.15 for its use over 10 months. We have had a lot of experience with copyright law over the years, yet we have never seen this kind of calculation before – a wonderous transformation of € 29 into € 3041.15.

The basis for calculating compensation is the ‘licence analogy’ – which essentially requires the court to assess what the dutch photographer would have charged for the photo. We made some investigations and surprisingly enough, the very same photo that Philip Bickel claimed was worth over €3000 euro was being sold for merely €29. We bought the photo just to be sure.

According to law, pictures cannot simply be taken and used without permission. In the case of an actual breach the illigitimate user will be liable to pay a reasonable amount in compensation to the copyright holder. However, when the amount of demanded compensation is exponentially greater than the actual value of the picture (as in this case), then it falls outside the realm of reasonable comprehension, especially for a firm as experieced in copyright law as ours.

If you have also received a demand letter from Phillip Bickel pertaining to an alleged copyright breach do not hesitate to contact us. We are here to help! 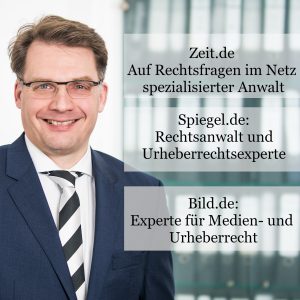